How to Choose a Crystal Ball 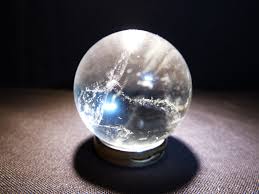 First decide on what you need the crystal ball for – for meditation, for wearing, keeping with you in a pouch, for divination or for protection.  That will determine the clarity of the crystal ball, and its size – from 40 mm to 100 over mm.  Other than its decorative and ornamental values,  crystal balls can be used for the following purposes:

Ask for the country of origin when you purchase the balls from the rock shops.  Generally, the better quality white crystal balls come from Brazil ,  Uruguay,  Argentina  or United States (Arkansas) , or some European countries (Alps region), or  Tibet of China (Himalaya).

I prefer crystal ball which is darker in shade, meaning it has more of the SO2 silicate dioxide.   It is stronger in vibration than its clearer counterpart.

Some also prefer the ball to have some inclusions, for example some want the needle like formation of rutiles to be in the stone, giving it an extra zap in energy. Some come with layers of shade,  (often in green color) which are call pyramid formations.  Green color formation in quartz is also known as phantom.    Genuine quartz balls have some natural inclusions; whereas those imitations are often exceptionally clear and unnaturally free from flaws.   But, once you can feel the vibrations of natural quartz, you can tell the difference between a genuine and an imitation stone.   If you know how to use your third eye to scan, the fake quartz will give you a blocked feeling on the chakra when you look    it; the genuine one will give you a pleasant and lively vibration, especially stirring your Crown Chakra.

Ultimately, you have to use your gut feel, or intuition to choose your crystal ball.  It is often said that if the stone is suitable for you, you will be drawn to it.