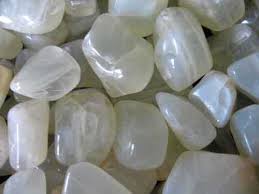 A true balancer of emotions, it specifically synchronizes with moon-based cycles (menstrual and biorhythm).    The feminine moonstone is especially good for women with problem-related to fertility and childbirth.  It has been used to alleviate fibroid cysts,  irregular menstruation and water retention problem.  Moonstone is said to be helpful in reducing weight.   For those practicing meditation,  the stone helps you to attune to psychic abilities.

A close relative was suffering from fibroid cyst and had been operated on, but did not manage to get rid of all the growth.  She was warned that if the cysts continued to grow, she might have to undergo an operation to remove her womb.  Nevertheless, after taking moonstone elixir for a year, the doctor was amazed to find her cysts shrunk in size.  To make sure that she ingressed the moonstone elixir, I actually deposited the tumbled moonstone in her home water filter system.

A sister of a friend of mine used to sell cooked food as a hawker and suffered from rashes in her hands after a prolonged period of handling the noodle,  (local version of spaghetti).  I asked her to wash her hands with moonstone elixir and it worked.  She could not conceive for almost 10 years after giving birth to her first child, a son.  I gave her moonstone ring to wear and a year or so later I met her and was told that she had just given birth to a baby girl.  You would call that coincidence, but I find that it works.

When I travel overseas, I have a few moonstone nuggets tucked away in my luggage.  Said to protect me, especially when crossing waters.

I used crystals as elixir – had them, and some moonstone, in my water filter system,  and my whole family drunk the water every day.  A simple way of preparing an elixir is to place the stone in water over-night, for better results over three nights.   Some said distilled water is the best to be used for making an elixir.   If you can get spring water or river water which is not polluted, that would be fine.  Try to use glass or porcelain container, and avoid plastic and metal.

If you need to drink the elixir, make sure that you cleanse the stones and get rid of the commercially applied coating of wax that makes the stones shining.  To be sure, before you use the stones, soak them in water over five days and discard the contaminated water.  Another quicker way is to submerge them in boiling water and drain away the water next morning.

When I was running a rock shop a few years ago,  I used to sell moonstone elixir in spray bottles.  Some of my well-informed customers believed that the elixir could help them prevent dry skin and maintain smooth complexion.  I have a spray bottle of moonstone elixir in my bathroom for both myself and my wife to use for facial cleansing.

There are methods of using flowers and herbs to combine with stones to create the elixir.  I remember a good combination with moonstone is Pomegranate flower.

Some folklore suggests that if you are traveling across waters you should keep a few pieces of tumbled moonstones in your luggage for protection purpose.   Similarly,  you could use aquamarine for the same purpose.