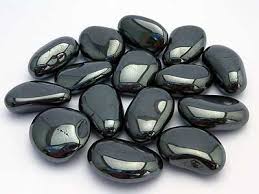 Helpful for blood disorders, nervous complaints and healing broken bones. Aids  blood circulation – those with weak blood circulation in their lower limbs should wear hematite bands or anklet on their ankles.  I once recommended it to the elderly father of the owner of one local rock shops. He was suffering from arthritis in the knee joints. The hematite anklet worked on him and he was relieved of the pains, much to the disbelief of his son who owned the rock shop.

The reflective surface has the ability to mirror away negativity. There was an Italian cook who worked with the Italian Embassy and whom I met at a function held in a local hotel to celebrate the Italian National Day.  He complained to me that he was a victim of the “Evil Eyes” , a kind of black magic, which had brought him much misfortunes. I gave him a hematite doughnut shape pendant. I met him a year later at the same function, and he was glad that the pendant worked. His fortune improved and he even started an Italian restaurant in town and got his wife to run it.

Excellent for mental attunement. Used for meditation and for connecting to earth energy. It is a good grounding stone to meditate with. There is one form of meditation recorded somewhere on the use of multiple tumbled hematite stones. The writer suggests placing the stones around our body as we sleep meditate. It is supposed to help us develop a hematite body shield to protect us against negativity.

Hematite is said to help in improving ones mathematical ability. There was a friend who had problems with calculations in running his unlicensed lottery business. He came to me and I recommended that he wear a hematite ring. After wearing the ring, he gave me feedback that it helped him to concentrate better in his calculations.

Records what occurs around it, and the scenes can be viewed as if reeling through a movie. I have not been successful in trying  out this.

Not all hematite are genuine. There is a type of stone from China that offers a cheaper metallic imitation. Genuine hematite has a special feature –  if you scratch the stone you can find streaks of red dust. It has been mistakenly called blood stone in same books. The other test is that genuine hematite does not have the magnetic qualities unlike the replica.