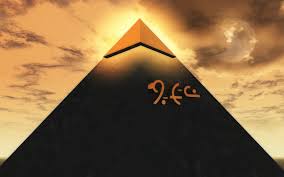 On the cleansing away residual negativity, may I share with you one method taught to me by my very first energy teacher, Mr. Liew.   He claimed that on one occasion during his meditation,  a Pharaoh from ancient Egypt visited him and taught him this method. That is the use of the Energy Pyramid, an excellent healing tool, which some of you may have heard of.  To practice this method,  one must have attained a higher level of visualization,  able to conjure the image of the pyramid and hold their attention on it for a prolonged period,  and have already trained and heightened their awareness of energy movements in and out of their body.

The method is as follows:

(1) Begin by visualizing an etheric pyramid, three dimensional, with base 3 by 3 feet, and of any color of your choice (brilliant white or gold are my favorites).

(2) Position it about two feet above your crown chakra.

(3) Visualize the etheric pyramid spinning in an Anti-Clockwise direction at the speed you chose. (I multiply it up to even the speed of light but for a start, it can be one spin per second).  You may use your right index finger to guide the counterclockwise rotation of the visualized pyramid.

(4) Notice that it has the suction effect on your energy field – it is supposed to clean away the negativity from your body (indirectly it helps to activate and strengthen your crown chakra).  It is a very good tool for meditation by maintaining a concentration of the counter-clockwise spinning he pyramids over your head.    Whenever I travel on trains and during long-distance flights,  I would focus on spinning the pyramid continuously as I meditated.

There were numerous occasions where I helped remove negative energy from houses – performing the cleansing on-site and remotely.  I have a former boss who also meditates, practices spirituality and have developed the innate gift of sensing energy vibration.  Whenever he feels that his house and its surrounding has strong negative energy intrusions,  he would telephone me and ask me to perform the remote cleansing.   I  would deploy the Etheric Pyramid over his house in my visualization to dispel the uncleaned energy vibration.  And,  he could subsequently scan and check for himself that the cleansing was successful.

The etheric pyramid can be used to get rid of lower level negative spirits, depending on the level of proficiency of the practitioner. It can be strengthened, or charged up, through prayers. I pray to the “Masters of Pyramid” before I activate it to do any cleansing. And, it improves with practice.   The other mantra I used is the  Mantra of Maha Vairocana  (Sun Buddha).  I also visualize the golden pyramid image I conjure up drawing energy from the Sun as if the four sides of the pyramid are like solar energy panels drawing and storing the sun prana (energy).

Also, it is no make-believe fantasy; I once cleanse an Italian lady who harbored tremendous emotional problem and resorted to excessively smoking of a type of very strong Indonesian cigarettes. Those few other persons in the room swore they saw thick black smokes “soot-like in appearance” coming out from the top of her head.

On another occasion,  a friend Jason phoned me one late evening and told me he suspected his wife was possessed by evil spirit.  He described that his wife appeared to be in a daze,  speechless and with wide opened eyes.  I immediately invoked the etheric pyramid remotely and visualized it spinning anti-clockwise above his wife’s head.  It appeared that it worked as he later recounted that his wife became conscious,  cried and later fell asleep.   She was alright the next morning.

I have dug into my archived collection and found this Question asked by my student in one of my previous Natural Energy Basic Course on the use of the Etheric Pyramid:

“Yes: Spinning the etheric pyramid can be a form of meditation – you use it as an object of concentration while you are practicing to improve your skill in the method. At the same time, you are cleansing yourself.

I have mentioned that spinning the etheric pyramid will improve and open up your crown chakra, bringing about the connectivity ability in energy realm.

Do not worry about whatever possible adverse effect caused by spinning the etheric pyramid; so far I have practiced it and taught it to many others and there have been no such complaints. It is an excellent tool in helping one to improve upon the visualization process.” –