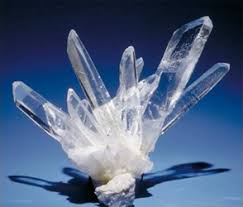 Much has been said about the metaphysical qualities of stones, or more appropriately called minerals. There is a general belief that all that exists is in a constant state of vibration, and crystalline structures have a particularly stable vibration which resists the influence of other vibration frequencies.

Minerals, particularly in their crystalline form, stimulate healing based upon the property of sympathetic vibration or resonance. They have very specific points of resonance with one of seven major energy centers (chakras). The colors of the stones seem to have a bearing on the qualities of the vibrations. This is more or less similar to the colors represented by the seven charkas which also coincide with the seven colors of the rainbow.

These resonant frequencies set up an electromagnetic field.

If we agree that dis-ease is disharmony in thought patterns, causing irregularity of energy flow within subtle (non-physical), the etheric and physical bodies, then prolonged exposure to the positive vibration of stones may have a healing effect.

Amulets and Talisman to ward away ghosts.

Other than their healing effects, minerals also offer protection against negativities and in a way bring luck to us. Certain stones, especially those of celestial origins appear to have the power to drive away unwanted or negative energy. These are stones like those from the meteorite family – tektite and moldavites – can actually ward off evil spirits. When carved with images of Buddha or deities, or when they are specifically enchanted by advanced practitioners, they can be used as very powerful talismans or amulets.

So, it is also believed that the wearing of certain amulets or talismans would protect you against ghosts. Also, some also feel that certain stones, especially the quartz family, (White Quartz, Amethyst, Ametrine, Citrine and Smoky Quartz) can offer the same protection. Other protective stones include diamond, pyrite, hematite, obsidian, black star sapphire, black diopside, and jet. Personally, I understand that stones have a varying degree of electromagnetic radiation. When they are worn on our body, they serve to strengthen our body energy vibration, sort of casting a protective shield over us.

One very powerful talisman I have is the image of the Earth Store (Dichang) Bodhisattva made of tektite. I also have a bracelet made of pyrite and an amber, and I use to have it with me whenever I traveled overseas. It is also believed that moonstone is good protective stones for overseas traveling especially crossing waters. I always keep a few pieces of tumbled moonstones in my luggage.

For those who are frightened of ghosts when traveling overseas and staying in hotel rooms, they can try arranging their shoes in the Ying Yang manner – one with the sole facing up while the other in the normal position – at the foot of their beds.

Amulets and talismans are similarly charged with strong vibrations by their makers – monks and priests alike, and they serve the same purpose as the stones. At my level, I am able to magnetize stones and any objects to confer upon them stronger radiation by using my energization method or by chanting of mantras.

There is a  belief that some stones contain memories of the past while some become a dwelling place for some life forms, just like the hermit crabs that inhabit the shell after the shellfish have died. My spiritual friend Stella has the ability to communicate with stones and she claimed she often saw impish looking creatures residing in some stones. Once I was meditating with one Labradorite ball (a kind of felspar stone which is opaque with luminous blue against a grey background). and spotted a woman clad in Greek-like gown amidst some Roman like pillars inside the stone. She had almond-shaped eyes and shape features and appeared annoyed by my unwelcome intrusion. There was another stone, a piece of Rhodonite – a pink color stone with black Manganese steaks, that I could see images of dome shapes structure. I also recalled another instance when an old lady handed me a piece of jade which she retrieved from the exhumed grave of her mother died long ago, and asked me whether it was alright for her daughter-in-law to wear it. The moment I picked up the jewelry I could feel a painful sensation in my stomach. I asked her whether she could recall whether her mother suffered some sort of ailment of the stomach, and she confirmed it. I cleaned the stone for her but she told me she had changed her mind about giving it to her daughter-in-law and instead chose to keep it in the jewelry box. Jade is said to have the unusual quality of protecting its owner. It would break into pieces whenever the wearer encounters dangerous situations; the folklore has it that it blocks off the dangers on behalf of its owner.

Chinese believes that wearing certain stones would bring them good fortune. Jade is the most favored stone adorn not only to bring good luck to the wearer but it also offers protection as well. For those gamblers who are ever hopeful windfall, they may wear yellow gemstones – yellow sapphire, topaz, or citrine. Some may even carry a pyrite doughnut together with a dollar coin in their wallet. Green stones are for attracting wealth generated from career, and they include not only jade but also emerald, peridot, quartz with chloride inclusions, aventurine, malachite, and amazonite. Besides wearing them as semi-precious stones set in rings and pendants, some of the tumbled stones (aventurine, malachite, and amazonite) can be placed in cash registers to help enhance daily takings from retailed businesses. In Feng Shui, the far left-hand corner of the premises diagonally opposite the entrance is an auspicious wealth generating corner and it is good if large stones can be placed there. Suitable stones include quartz balls, aventurine balls, and amethyst geodes.